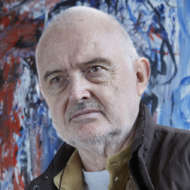 Klaus Prior
https://www.klausprior.net
This user account status is Approved
About About
Artworks Artworks

Klaus Wilhelm Prior was born on July 28, 1945 in Wesel, Germany. In the last months of the Second World War, his home town was almost completely destroyed by heavy bombing.  The post-war period and the dramatic atmosphere of reconstruction influenced prior’s childhood.  After the obligatory years of schooling, he successfully completed his vocational training at a turbine company in Wesel.  Already in his early years he showed in interest in art and took his first guidance from some of the local artists.  In 1964 he settled in Switzerland where he worked in a series of metal working plants.  Through the cl ose contact with life in the factories, he got to know the multi-ethnic world of the working class.  During this time he made his first auto didactical experiments as a painter.  In 1967 he specialized in machine building and simultaneously applied for a retraining program as an embroidery designer, but was rejected by the aliens police.  In 1968 he attended evening classes in painting and drawing at the School of Applied Arts in St. Gallen. In 1970 he moved to Ticino.  Through his engagement with painting he produced works in which the human being stands at the center and which Prior repeatedly observes from different angles.  His passion for painting continued, although simultaneous with this period of his work, the artist underwent a deep life crisis during which he questioned some of the pieces he had created and destroyed them.  In the 1970s and 1980s many of his paintings were bought up on the art market.  Frequent travels throughout Europe and the United States gave him the opportunity to see and develop an appreciation for the great masterpieces in large museums and at exhibitions.  After nearly two decades in Ticino, Prior became a Swiss citizen in 1989.  For several years he was an active member of the association of Swiss painters, sculptors and architects.  In the early 1990s he conducted his first trials as a sculptor with a variety of materials, and finally chose wood as his preferred one.  Since 2003 he has also added iron casting.  Prior shows his work in many exhibits in Germany, Belgium, Italy, Spain and Switzerland. Through these, one can see the development of his sculpting and the process of deepening which has taken place in his painting. The artist lives and works as a painter and sculptor in Lugano and in the Allgäu.