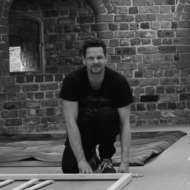 Swen Kaehlert
http://www.swenkaehlert.com/
This user account status is Approved
About About
Artworks Artworks

Swen Kählert, born 1969, crosses the borders between genres in his painting. As a painter he experiments with materials, as an architect he thinks three-dimensional. Taking advantage of this multi-perspective habit, he creates artwork that overcomes traditional categories and settles down in the space between painting, object and micro-architecture.

Swen Kählert studied architecture at the HAW (university for applied sciences). He extended his artistic spectrum among other things studying with prof. Armin Sandig. In 1997 he received a scholarship from the Carl Duisberg Foundation and went for almost a year to Caracas/Venezuela designing public spaces and subway-stations at the Metro de Caracas. 2017 he put into practice his large installation „Island“ for FLOATING ART at Museum Veijle in Denmark. His works has been showed in many exhibitions in Germany and abroad.